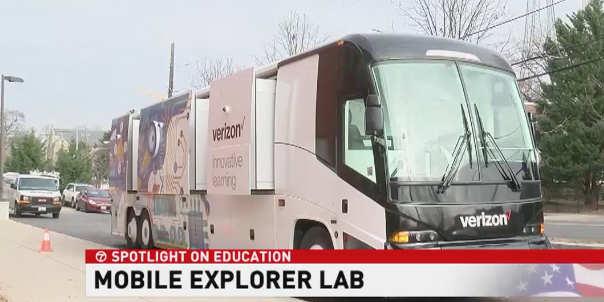 Eighth graders at Brightwood Education Campus in Northwest are about to embark on a mission to Mars.

“They’re going to be designing their own Mars rovers, learning how to take those Mars rovers out into the field and basically gather evidence, change their wheels,” Brian Gaines of MdBio Foundation/Verizon Innovative Learning said.

The mobile Verizon Explorer Lab is on one of its first visits to D.C. schools. But what looks like a trailer on the outside is a 360-degree interactive video experience on the inside.

“They will be learning not only about science and exploration, but also how STEM careers can open the futures for them,” said Mario Acosta-Velez, the director of state government affairs for Verizon. Next year, the lab will visit 14 schools in D.C. and reach more than 3,000 middle school students.

“Having to work together, having to develop a rover, test it, and retest it in a simulated environment in a way that sounds like a game is a lot of fun for the kids,” Brightwood science teacher Brook Estifanos said.

Musami Wambura, 13, agreed but shared the complexity of the assignment. “Some rovers won’t work. Sometimes we have to change the wheels and things and think outside the box just to solve it at this level,” he said.

The Explorer Lab is scheduled to travel to almost every middle school in the District next year.