Just Do It Now youth educated through MdBio 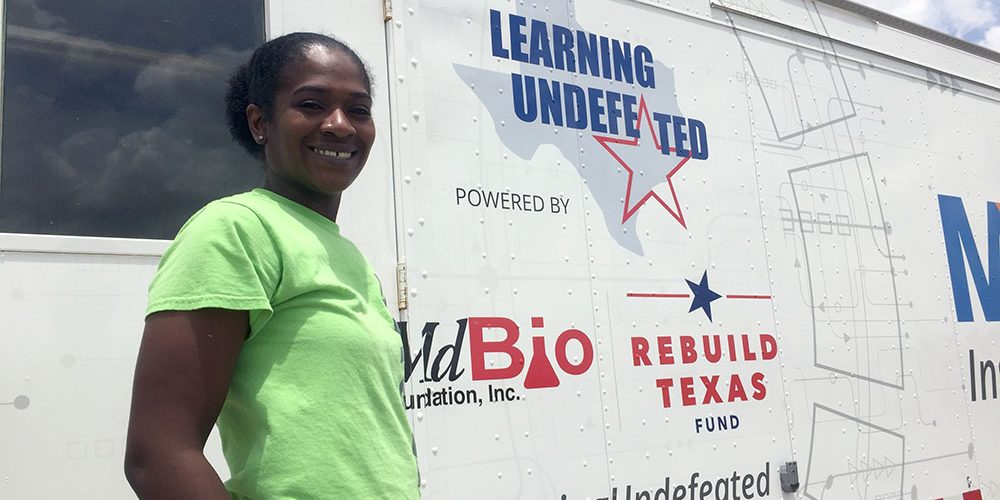 Just Do It Now has an MdBioLab sitting in its front lawn.

According to the MdBio website, the MdBio Foundation, which comes out of Maryland, aims to bring STEM (science, technology, engineering and mathematics) to underserved communities. During the school year, MdBio brings science to school districts. During the summer, MdBioLab comes to summer programs.

One such summer program that MdBio has decided to visit is Just Do It Now, by Rebuild Texas.

“We got the MdBio trailer trough Rebuild Texas, and they’re funding it to be here until August. It’s really neat. The kids get to do a lot of science projects and a lot of the kids who hated science are loving science now, and that’s the part that I’m liking,” said Just Do it Now Executive Director Charlotte Dorsey.

The MdBioLab focuses on bringing an interest in science to the children in the program. “Basically, we are just engaging kids in science. There are so many science jobs. In the next couple years, there are going to be outrageous. The need for science is huge. So the whole program is to get the kids while they’re young so that when they’re older they’ll go back and say, “Hey, I love science’ to get them into the science field,” said MdBioLab instructor Desurae Matthews.

Matthews previously worked at Just Do It Now as the program director of the “Yes We Can” program. Now, she works with the MdBioLab bringing science to the children in the Just Do It Now summer program that she worked with previously.

“The kids love it. When I first started, the very first day I asked, ‘How many of you guys like science?’ Probably two or three hands went up. Then I said, ‘Well, how many of you guys like making slime, or making ice cream and rock candy?’ And they all said, “Me, me, me!” and I told them, “baby, that’s science,” Matthews said. “Basically, getting the kids involved with science is what the program is geared for, trying to get the kids to love science without even knowing that they’re doing science. They’re basically doing science every single day and they’re loving it. I just had to basically make them get off the bus.”

The MdBioLab allows children to work with devices, such as pipettes and virtual reality programs, in their lessons, Matthews said. “Many of the students we serve would not have access to this type of equipment without MdBio literally driving it to their schools,” Matthews said. “The MdBioLab just gets kids to love science.”