Shark fin s are in incredible demand in Asia, costing hundreds of dollars a pound to be used in soups. In order to collect fins, poachers will catch sharks and de-fin them, often throwing the harmed sharks back into the water where they are unable to swim properly or survive. Due to the greatly dwindling shark populations, the U.S. government protects certain species, like the great white, and has made it illegal to hunt and trade them. Unfortunately, bringing those who illegally kill great white sharks to justice is not an easy task. It is often impossible to visually identify what species a shark fin belongs to, especially when the fins have been dried and processed.

In this lab, students will compare the DNA fragment(s) in a sample of DNA from a package of fins to great white and porbeagle shark DNA controls to determine if your unidentified fin is from a great white shark.

Students will be able to 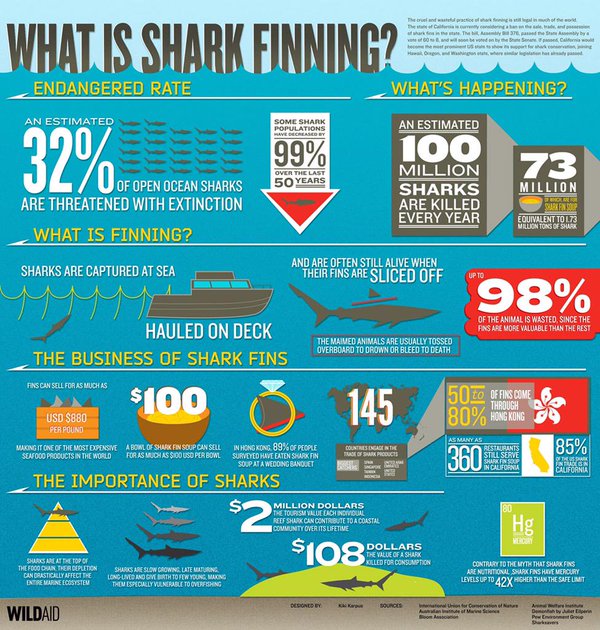 The Endangered Species Act was passed in 1973 by Congress in order to protect and recover species in danger of becoming extinct and their ecosystems.

Have students read about and discuss the evolution and implication of the ESA and how it affects wildlife, our economy, and other world factors.

Students can also engage in an activity about the politics and decision-making connected to endangered species with this activity: https://www.populationeducation.org/sites/default/files/activity-bye_bye_birdie.pdf

A high demand for shark fins, especially in the eastern part of the world, has resulted in the reduction of many shark populations. In response, the U.S. government has begun to protect the species of sharks that have become threatened due to over-fishing. Customs agents have received a package that contains dried fins from an unidentified species of shark. It is suspected that this package may have fins that belong to the great white, one of the U.S.’s protected species. You will need to use genetic analyses in order to determine if any of the confiscated fins were illegally obtained.

Dr. Mahmood Shivji, a conservation biologist, has devised a test that can rapidly identify a species of shark by using small fragments of the DNA in the shark fin and a technique called Polymerase Chain Reaction (PCR).Technicians have already extracted DNA from the confiscated fins and have used the ribosomal DNA primer and the great white-specific DNA primer to amplify the corresponding DNA. As a technician for the U.S. Fish and Wildlife Laboratory, it is your job to analyze these PCR results.

US Fish and Wildlife Lab
Tour the lab, learn about evidence collection and preservation, read about US statutes and laws pertaining to wildlife, and much more

Dr. Mahmood Shivji
Learn about the man behind the method. Explore Dr. Shivji’s work and read the original peer reviewed article explaining the science behind the technique

WildAid.org
Learn about an organization dedicated to ending the illegal wildlife trade. Explore volunteer and internship opportunities all over the country