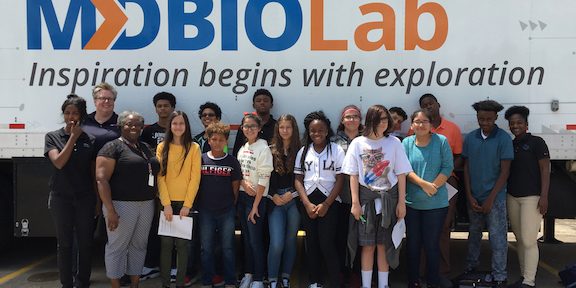 “Hurricane Harvey left behind unimaginable destruction,” Abbott said in a press release. “But over the course of the past year, we have seen that nothing is more powerful than Texas helping Texans. From first responders, to Texans with fishing boats, NFL players, musicians, business leaders and generous Texans like Susan and Michael Dell, never before have we seen so many Texans making a difference.”

“The Wharton ISD is extremely appreciative of the support of the Rebuild Texas Fund and Michael and Susan Dell,” WISD Superintendent Tina Herrington said. “Their financial support has resulted in increased technology and learning experiences for the students of Wharton. We appreciate having First Lady Cecilia Abbott and Susan Dell, along with representatives from Rebuild Texas, in Wharton to observe our students as they explored the many resources made available to them. Through the support and generosity of many we are recovering from the damages associated with Hurricane Harvey.”

Three WJHS students were given the opportunity to present in front of Abbott and Dell. The students were nervous but confident, MD BioLab Education Outreach Coordinator Desurae Matthews said. “The kids loved it,” Matthews said. “It was a good experience for them to be able to present in front of someone so important was awesome. It definitely built up their confidence to be able to speak and present in front of someone with so much power over America. They were nervous at first but when they were realized that this was really happening about five minutes before they build up their self-esteem and were really confident.”