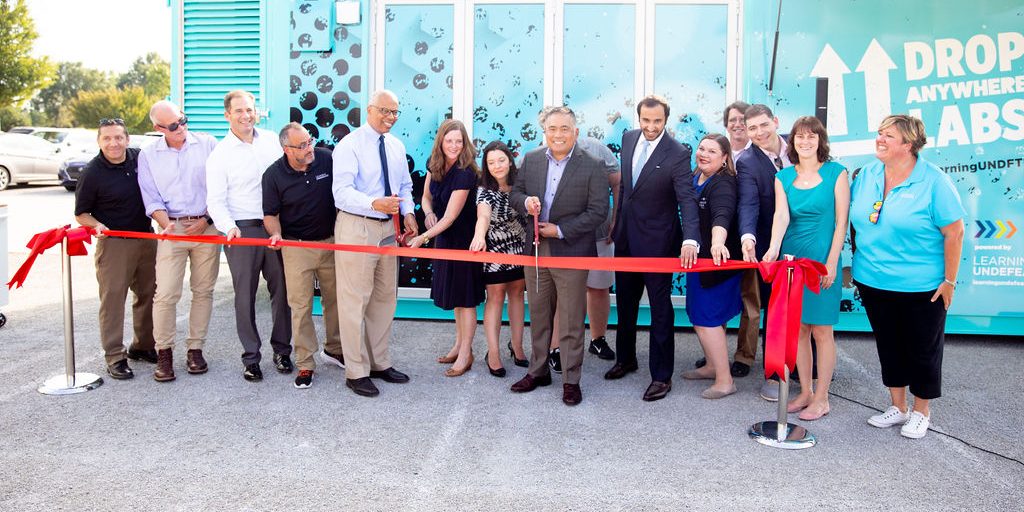 ROCKVILLE – Lt. Governor Boyd Rutherford and Learning Undefeated, a nonprofit for STEM education based in Gaithersburg, unveiled three new laboratories for the use of underserved schools in Maryland and Texas.

Learning Undefeated works with the disaster relief funds Rebuild Texas Fund and Qatar Harvey Fund to build the new labs to support schools impacted by Hurricane Harvey, which hit the Texas coastline in 2017 and is second only to Hurricane Katrina as the costliest hurricane on record in the United States.

The labs, called Drop Anywhere Labs, are unique for the Learning Undefeated education program, as they are repurposed shipping containers. That makes them smaller and less expensive than the organization’s previous labs.

While two Drop Anywhere Labs will be sent to Texas schools, one will stay in Maryland to support Learning Undefeated’s mission of promoting STEM education and careers in Maryland middle schools and high schools.

According to Rutherford, the nonprofit got in touch with the governor’s office after learning of the administration’s work in advancing interest in STEM in schools, especially in promoting STEM careers to young girls and minority groups. Along with Learning Undefeated, the governor’s office has partnerships with Girls Who Code and Million Women Mentors as part of this drive toward STEM careers.

The organization, originally known as the MdBio Foundation, has been in Maryland since the mid-1990s and created its first portable lab in 2003. The labs travel among underserved schools in the region, and have been in 18 states since the organization’s inception. Learning Undefeated has visited more 500 schools in Maryland alone.

Learning Undefeated has also its own summer camp, and works with after-school programs such as the Boys & Girls Clubs and Scouts of America to reach out to students.

“I think (the program) was good for me,” said Fabian Garcia, whose mother enrolled him and his brother into Learning Undefeated’s Young Science Explorers Program, a summer camp for middle school students. “I got to learn new stuff, like how water is made. I think it’s important.”

Learning Undefeated has recently prioritized its efforts on behalf of schools affected by natural disasters, which prompted the Rebuild Texas Fund and the Qatar Harvey Fund to support the Drop Anywhere Lab program. While the nonprofit’s labs are typically borrowed for no more than a week, they are allowing schools affected by natural disasters to keep them for as long as they might deem necessary to support the schools.

While Learning Undefeated gets a significant amount of its funding from private businesses, such as the Toyota USA Foundation and AstraZeneca, a biopharmaceutical company – it also relies on funding from the state of Maryland.

“STEM careers are really important to our state,” said Rutherford. “We need to make sure to continue to have the workforce…to lead the state, but also to lead the nation. And that starts with our young people.”