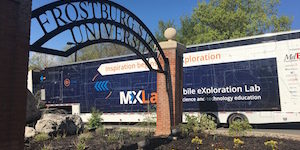 FROSTBURG — The clouds looming over the Mountain City on Saturday didn’t stop local kids from catching some rainbows.

Close to 800 children from K-12 schools in Garrett and Allegany counties as well as their parents participated in the seventh annual Western Maryland Science, Technology, Engineering and Mathematics (STEM) Festival hosted by Frostburg State University. The event took place at Cordts Physical Education Center Main Arena on the FSU campus.

The mobile exploration lab, a custom-build laboratory on wheels provided by the nonprofit MdBio Foundation Inc., taught kids how a light spectrum works. It was the first time for the unit at the event.

“They’re basically making the spectrum of a rainbow and learning a little math and a little creativity,” said Brian Gaines, chief executive officer at the MdBio Foundation.

By using a micropipette, or tool to measure water, children placed the colored water droplets into test tubes, thereby learning that different volumes of water produce various colors of light, mimicking how sunlight passes through a prism, or drops of water in the atmosphere ultimately create a rainbow.

Gaines hopes the exercises will inspire kids to choose a STEM-based career path.

“We do it to help kids and we basically want to get students to think about careers in STEM,” he said.

Why should kids think about careers in STEM?

“Because you can make a lot more money than not working in STEM,” said Gaines. “Basically, the average salary for a first year STEM career is $82,000.”

In addition to salary potential, Gaines said the nation’s economy is rooted in STEM.

“Think about it,” he said. “Almost all careers now have some aspect of technology or mathematics or engineering, even an auto mechanic; the car is a computer now.”

At least 25 additional organizations provided hands-on learning stations to children throughout the day, including Exclamation Labs, Scales and Tales and the Allegany High School Robotics Club.

Students could build robots at multiple stations, learn plant species with members of the FSU biology department, learn how river channels migrate into the ocean with the university’s geography department, or invent and design an object that an “extraordinary” character will need at the Evergreen Heritage Center Foundation station.

“They’re crazy ideas,” said Elaine Raesly, Evergreen director of education programs, “but the notion is to have kids interested in design because it’s part of the engineering process.”

Danny Kojevnikov, a fourth-grader at Cash Valley Elemetary School, drew a bathtub for his soldier at the Evergreen booth.

“I just made a bathtub,” he said, “because people use that to clean.”

Scott Fritz, associate dean of the College of Liberal Arts and Sciences at FSU and co-chair of the event, hopes students visiting the university for the day will someday choose the university to pursue the education needed for a STEM career.

“It (the event) gets local students to the university, and hopefully they will be future FSU students,”  said Fritz.

Inspiration is Everywhere: Keeping Students Engaged with STEM in the Age of Distance Learning
November 5, 2020