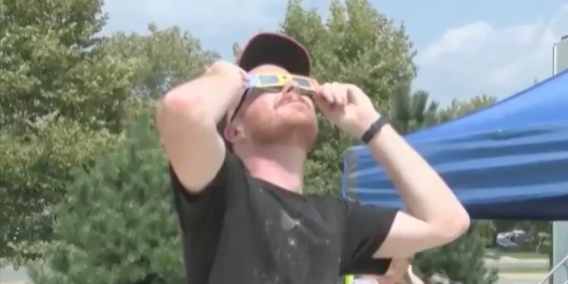 ROCKVILLE, Md. – It’s the day sky gazers have been waiting all summer for!  MdBio celebrated the eclipse on their mobile lab with themed experiments, snacks and more. The first 100 people snagged a pair of the coveted eclipse glasses.
People of all ages were excited to see this phenomenon firsthand.  “I heard that it gets completely dark outside, and it would be cool to see at like two in the afternoon,” said eclipse party attendee Neve Norris.
“I’m just really excited. Hopefully, the next time in 2024 will be even better, because it’ll be better chances for 100 percent,” said Tom Sljukic, who also attended the viewing party.
The next chance for a solar eclipse in the United States will be April 8, 2024.

Faith groups step up to host vaccine sites. Why churches are key places, especially for people of color.
February 25, 2021

Churches Pair Up with Clinics to Deliver Coronavirus Vaccine to Those Who Need It Most
February 10, 2021